The story of Baume & Mercier began in 1830 when the Baume brothers, Louis-Victor and Célestin, opened a clockmaking company in Les Bois, in Swiss Jura. However, it was only when William Baume and Paul Mercier became associates in 1918 that they went on to lay the foundations for “Baume & Mercier” and the Brand’s vision of watchmaking began to crystallize. The pragmatic approach of William Baume, a brilliant, ingenious, avant-garde watchmaker, gave rise to the in-house Baumatic movement, the epitome of technical achievement in the service of the client. The inspiration of the aesthete Paul Mercier, a peerless salesman and art enthusiast, infused the Brand with the creativity that shaped its destiny. Since then, the Baume & Mercier DNA has upheld attention to design, a continual interaction between pragmatism and aesthetics, and a collective, collaborative approach. Driven by the prestigious Baumatic in-house caliber, the Riviera 10617 is the subtle combination of refined and sporty look. Displaying a smoked sapphire gray dial and a black steel-ADLC dodecagonal case, this distinctive silhouette is finished with a black rubber strap for an ultimate black look. 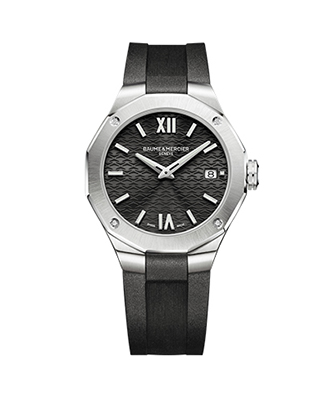 Driven by a “Swiss Made" quartz movement, this Riviera is adorned with a black dial and mounted on a rubber strap. Loyal to the original design, it keeps a dodecagonal bezel; a unique decor; and an interchangeable strap system. Recommended for assertive personnalities. This Riviera in 36mm is equipped with an automatic movement for active and independent women. Combining dodecagonal case, silver-coloured dial with decor, and a metal interchangeable bracelet, this timepiece offers an off-beat elegance and Swiss precision. Sporty, dressy, casual, this Riviera is a multifaceted timepiece that will please many personalities. Equipped by a "Swiss-made" automatic calibre, it features a dodecagonal case, a deep green dial adorned with a unique pattern and a green rubber strap. The perfect choice for people looking for versatility.